Diploma Mills: How to Spot and Avoid Them!

Diploma Mills: How to Spot and Avoid Them!

Diploma mills are everywhere. These “schools” promise prospective students a fast and easy road to a degreed job, but you’re in danger of destroying your professional reputation FOR LIFE by using a degree from a diploma mill. Instead of opening the door to your dream job, a diploma mill could lead you straight to prison.

Communications technology has opened new vistas in distance education, but it unfortunately has also provided a new way for scamsters to exploit unsuspecting internet users. There is a lot of controversy around the definition and use of the term “diploma mill.” As new innovations in educational technology expand our old definitions of the word “university,” it is hard to come up with a definition of a diploma mill that doesn’t accidentally include at least one perfectly legitimate unconventional school.

Keep in mind that, when the term “diploma mills” appears in this article, it is used to refer to any institution offering a postsecondary degree, diploma, or certificate: Accreditation is a recognition granted only by the United States Department of Education or the private Council for Higher Education Accreditation (CHEA). Schools that do not claim accreditation, but still grossly misrepresent how widely their degrees are accepted, can also be classified as diploma mills.

Browsing the web, a lot of fly-by-night “distance learning universities” can be found that fit this description. These “schools” are operated by unscrupulous people looking to take advantage of the fact that distance learning is a new concept to most people. Don’t be fooled by high-priced ads alone–just because a school appears to be financially successful does not mean that it is a legitimate institution of higher learning.

There are literally thousands of distance degree programs out there. Some are excellent, while others are good-to-fair. Some are so dreadful that listing them on your resume might land you in prison. Amazingly, price isn’t always the best indicator. Finding just the right distance education program can be overwhelming, and that’s why we’ve created DegreeFinders.com. You can rest assured that every school and university featured on DegreeFinders.com is an accredited academic institution.

How To Spot A Diploma Mill

Let’s learn more about diploma mills and give you an idea of how to avoid them. If you are skilled in detecting whether or not a school or degree program is legitimate, this popular ad should definitely trigger your alarm bells. 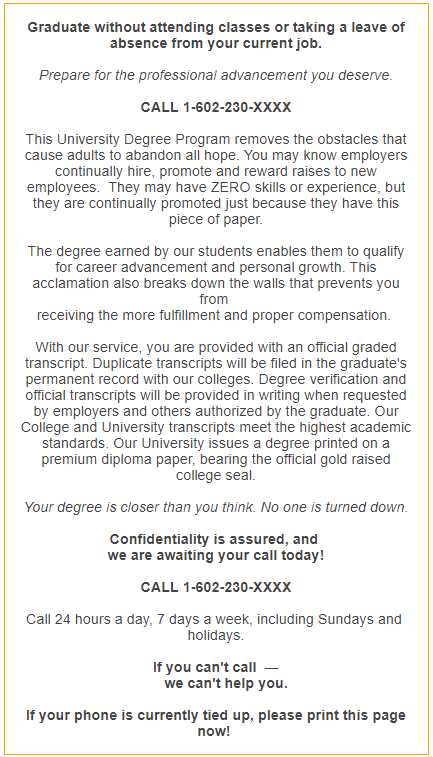 Grammatical errors aside, one way in which this ad should be alarming is the fact that the listed contact phone number changes frequently from ad to ad. If you come across a school website or advertisement featuring different contact information every time you see it, there is a good chance that you are dealing with a diploma mill.

Notice the attention paid to the quality of the physical diploma itself. The ad assures you that this university issues only diplomas “printed on a premium diploma paper, bearing the official gold raised college seal.” Instead of focusing on the long-term worth of the diploma you will receive, this ad is only concerned with letting you know that your diploma will be printed on expensive paper and will at least look “official”!

It is highly unlikely that your career will be advanced by any degree granted to all applicants. When an ad boasts, “No one is turned down!” consider the actual worth of the diploma you will receive. Even worse, the ad fails to mention that, in some cases, using a degree from that “school” could actually even land you in prison! For the most part, when you come across ads of this kind, it’s probably best to save your money and invest it elsewhere.

If you are unsure about the legimitacy of a particular school or institution, try browsing for more information about the school online. The more information you find–especially that coming from official and recognized sources–will let you know how established and trustworthy a potential school really is.

While we do not have the legal authority to label any school as a diploma mill, at DegreeFinders we aim to alert our site readers to certain situations that should cause concern on the part of potential students. Based on popular demand, we are now in the process of developing an informational how-to guide that will help our readers not only find the best degrees and get the best educations, but also prepare them for their ultimate immersion in the job market, helping them find the career that is best for them.

Now What? The Next Step Is Easy!

Take the first step today and browse our large database of free information about the best accredited online colleges, or simply use the form below to find the career program that is right for you!

American Legion Magazine. Degrees of Guilt April Issue, Vol. 142, No. Mark Rowh. A very good overview of the problems caused by diploma mills, the extent of the problem and how to avoid being conned by a diploma mill.

Better Business Bureau. Is the Internet Becoming a Haven for Diploma Mills? Short but to-the-point article on the increasing prevalence of diploma mills and some of the warning signs that you may be dealing with one.

Hamilton Spectator. Diploma.mill Sep 3, 1999. Interview on the subject of online diploma mills with Rodney Merrill, distance degree consultant and founder of DegreeFinders.com; John Bear, author and pioneer in distance degree research and consulting; and other authorities in the distance learning field.

Wired News. Mar. 23, 2000 Kendra Mayfield. Phony Degrees a Hot Net Scam Interviews on the subject of online diploma mills in the era of online degrees and other forms of distance education. with Rodney Merrill, distance degree consultant and founder of DegreeFinders.com; John Bear, author and pioneer in distance degree research and consulting; and Michael Lambert, executive director of the Distance Education and Training Council.

Bizjournals.com/South Florida wrote and excellent series on Barrington University, one of the so-called “prestigious non-accredited universities” offering degrees in the ad above:

Company literature described the chairman as having a doctorate and masters degrees, but he has neither.
The university accreditation service touted by the company doesn’t have offices at addresses given in Switzerland and Washington, D.C., but a search found it was incorporated in Florida by a group that includes Virtual Academics’ chairman.

From the October 27, 2000 print edition. Editors. Virtual Whatever is an opinion piece that summarizes and puts a spin on the findings described in the article above.

The company failed to notify Alabama that the university, which is registered and incorporated in the state, changed ownership in January. When a state inspector checked, Barrington University also had moved out of its listed headquarters at A&S Answering & Secretarial in Mobile.

When a state like Alabama—with some of the most lax degree granting laws in the nation— threatens to pull a university license, you know something is not right!