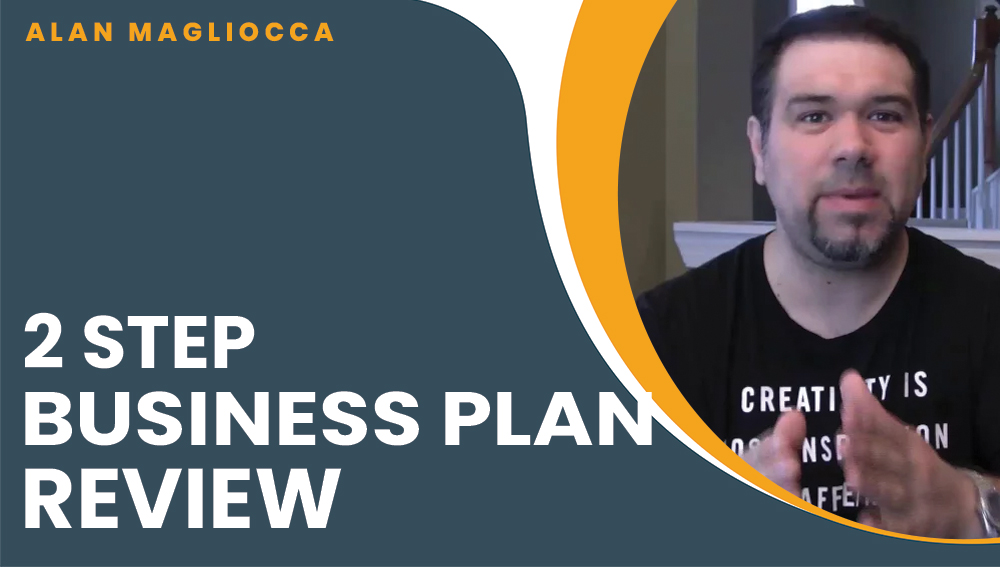 Alan Magliocca wants you to skip his YouTube ad if you’re not wanting to make at least $10,000 per month and live a life of freedom.

There’s a roll of toilet paper in the background. We’re only five seconds in and I’m already skeptical and grossed out, but let’s hear what the man has to say, shall we?

Continue down this page for my 2 Step Business Plan review. I think you’ll be glad you did.

Alan says he makes five figures or more per month using a simple one page site and little thirty five cent ads. You too can have your own digital sales machine. You can be up and running in mere hours. And then your job is just to oversee the system.

There’s no manual work. No stress. Alan’s book, 2 Step Business Plan, will explain. He normally charges $37 for it. But today only (wink, wink) you can download it for just $5.99 plus God only knows how many upsells.

The ad continues. You won’t need a preexisting audience. You’ll work less than an hour a day. No wasting money on unreliable ad networks. Oh, and you don’t need any skills whatsoever.

Just ask some of Alan’s past students who’ve (allegedly) gone on to make millions of dollars in net profit using what he taught them.

Alan’s system solves the three main problems that keep people broke. One is inconsistent and unpredictable lead flow. Second, not knowing the right offers to promote. And third, following trends instead of a proven plan.

Those will be a thing of the past when you pick up a copy of Alan’s deeply-discounted 2 Step Business Plan book, along with $685 worth of actionable bonuses (I can’t with this guy).

Not surprising, when the YouTube ad ends and I click over to Alan’s landing page, the red flags continue to pile up. Big red headlines. Yellow highlighter. A photo of Alan’s family about to board a private jet.

A long-winded letter from the desk of Alan Magliocca in Charlotte, North Carolina. Enough bolding, italics, and underlining to give me a seizure. Testimonials that seem entirely made up. Offer good through today only. (Sure, Alan. We believe you.)

I don’t think Mr. Magliocca missed one trick from the Guru Playbook. And the fact that he titled his book The 2 Step Business Plan is equally hilarious. Yes, all multi-million dollar businesses are the result of two simple steps.

That’s definitely true. And move over Tim Ferriss, Alan’s workweek is only two to three hours. Yep. This is the “new way” to do digital business. “You hardly work.” Do “two steps,” both of which can be “automated.” And that’s all it takes to “generate massive revenue.”

But maybe my sarcasm is unfair. Maybe you can trust Alan. After all, he founded Affiliate Academics, Inc. and has a pic of himself standing next to Kevin Harrington, a guy who’s been associated with more scammy products and people than anyone in history.

Ugh. What a shame. Alan has legit skills; he just chooses to monetize them in the most illegitimate way possible. Through hype and deception: “This is truly a limited offer so claim your copy before they’re all gone.” (What, are you going to run out of PDFs?)