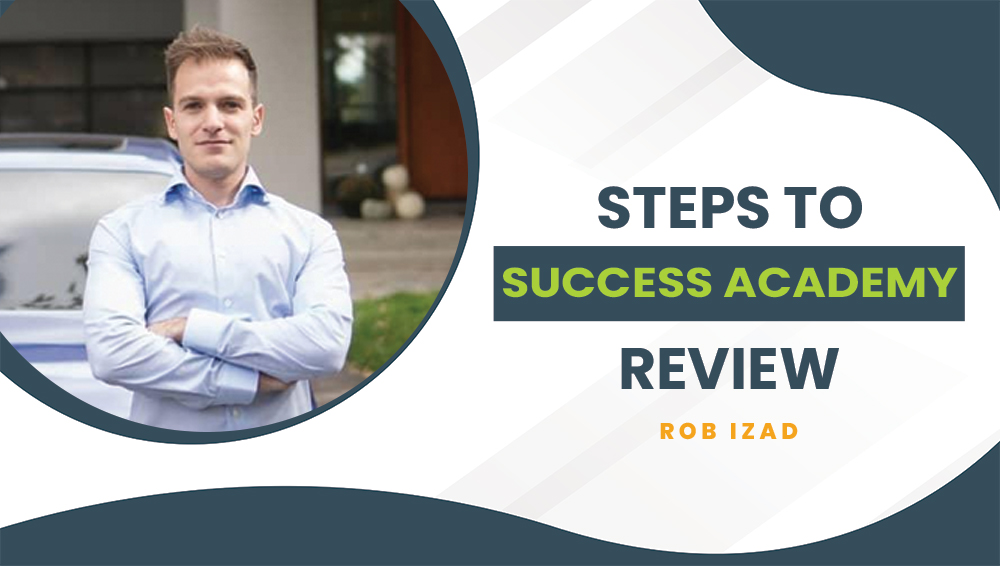 Rob Izad wants to demonstrate how you can get 6 figure annual income by simply selling on Amazon across the globe.

That way, you can finally quit your soul-sucking work, elevate your career, and live on your dreams. The kind of life you always imagined would eventually come into play. But is Izad’s Amazon FBA legit? Can you make tons of cash out of it? Continue reading for my full Steps To Success Academy review.

Back in 2017, Rob discovered Amazon FBA, in which you deliver products straight from your manufacturer to Amazon. Then, they’re in charge of the delivery and customer service. After weeks of research, he released a product and managed $7000 in the first week.

He foresaw the breakthrough, so he went all-in. But this dude is pretty honest; it was a roller-coaster ride! He indeed experienced a lot of hurdles. Flash forward to this year, he’s able to close $200k sales every month.

Rob admits that his Amazon business isn’t a get-rich-quick system. Still, if you follow his advice, you’ll allegedly make more money – quicker than typical entrepreneurs out there.

He supports it by introducing Greta Fox, a former enrollee under his mentorship program. This gal used to work in a call center. But through Amazon, she’s able to kick off $8k income. It was only 2 months since she started building her online store. Today, she’s able to travel the world while earning a passive income.

Rob says that you can slice it into 3 simple but crucial actions. The first step, find profitable products. Next, locate the merchandise. Lastly, get it on the Amazon front page and sell enough units to earn the Amazon Best Seller badge.

If you get this right, you’ll embrace a good life! As a coach of Steps To Success Academy, Rob will keep an eye on ensuring that you’re doing what’s being asked!

This program is set for everyone who aims to build a million income through Amazon FBA. Rob considers it an easy-breezy program. It’s not that risky to begin with.

Today, the owner claims that their company has made 8 millionaires, 150 six-figure marketers, and almost 600 wageworkers finally ditch their job.

So, what’s the price of this Steps To Success University?

Three-month training costs $2k, while a year of training costs $5k! It’s all up to whether to want the entire year or not. Note they don’t offer refunds. So, if you want out by mid-year, there’s no way you can get your money back.

Set a call with his team if you’re planning to sign up.

But to those who can’t decide yet, should you? Possibly. As I ran inside his funnel, I couldn’t find anything to be scared of. It looks like he has a massive success on Amazon. This is all, however, on the program. I need at least one proof or case study from his shop.

Aside from that, there seem to be no red flags for Rob or his program. But, as I usually tell people, FBA isn’t all that it’s built up to be. You’ll have to contact a slew of vendors and haggle over rates. You’ll have to run expensive pay-per-click advertising, which will eat up the majority (if not all) of your earnings.

And, because everyone in Steps To Success and other FBA courses is teaching the same things. Everything is about finding trendy products, and even if you hit one profitable product, your days have been numbered. It’s so easy to imitate people’s stuff nowadays. As a sad result, your passive income will vanish. But that’s not the case for us. Click on the link provided below.